The industry of advertising is intriguing and challenging. To some extent it is a true art of appealing to the most sensitive emotional spheres and pulling hidden triggers in consumers’ heads and souls to outweigh the scales in favor of a particular product or brand. Although it might seem to be a rather simple task comparing to biochemistry or accounting, it implies tough work on developing an accurately calculated and elaborately circumspect combination of numerous elements together creating that astonishing effect on consumers when they prefer one brand to another or purchase a totally new product.

Advertising specialists struggle to develop perfect adverts as nowadays there are so many products offered and so many adverts it has become a real challenge to captivate consumers. Deep knowledge of psychology is now a key to success while applying various non-verbal tools and signs in advertising. Thus, there are more elements included into a simple, at a glance, print advertisement: besides the image itself consumers are influenced by the prevailing colors, choice of language and newly created words, signs with double meanings, location of the elements, etc. Successful combination of all the elements leads to increased sales and, hence, profit. In more detail, advertising serves to increase immediate turnover, raise product or brand awareness, introduce a new product or brand into the market, show or emphasize distinctive features of a product to the target audience.

Advertising of airlines has been a stand-alone sphere for a long time as earlier it was used by limited target audience (mainly business people, the rich and the military). Nowadays advertising specialists have to consider and emphasize the points of significant importance taking into account a tremendously large and extremely diverse group of flying nowadays travelers – flight schedule convenience and comfort during the flight while the price comes third. Moreover, luxury proposals are becoming more popular with the globalization processes as many exotic destinations become accessible.

Both adverts by Emirates and British Airways offer this particular niche proposal – exotic destination along with high comfort level. However, the approaches they choose differ.

Emirates’ advert conveys an image of comfort showing in detail a part of a rest room with a woman obviously just after shower or a SPA procedure. The interior reminds of a luxury hotel or a salon with expensive sanitary porcelain, marble, soft towels and fresh flowers. Hard to notice it is a plane rest room as only the built-in disposal box proves it. The colors are soft and calm which is harmonically combined with the serene and relaxed look of the lady. It is worth mentioning, that she is rather young, between 25-35, looking beautiful and fresh without any sexual context. She is looking at her reflection in the mirror and smiling. There is a large picture of Dubai landscape in front of her. The image is rather foggy and presumably is intended to emphasize not the destination, but the company name. Emirates’ bright red logo in the low right corner is well balanced by a bright fuchsia orchid in the low left corner also reminding of exoticism.

The advert is supported with the headline in white in agreement with the overall image of calmness and peacefulness. The slogan for the campaign is intriguing: the words “memorable moments” catch the eye immediately, while “at 40,000 feet” give a certain quiz for a viewer. Thus, the viewer understands that the offer is for luxury flights. The copy gives more details while repeating “memorable moments” trying to point out this competitive advantage and mentioning other services such as SPA showers, exclusive lounges, etc. It also repeats the company name and provides useful information on flight frequency, the plane type A380, etc. The company offers “inspiration” and “tranquility” from their “exclusive” services as a consequence of becoming their customer. The directive is given in a form of soft and unobtrusive advice to “find inspiration”, “refresh” and “experience” the offer.  In general, this advert gives an impression of a luxury though peaceful promise. It hints at high price without mentioning it, pointing at more valuable things – comfort, tranquility, inspiration.

British Airways exploits a different approach: the image is unexpectedly striking with its controversy and pithiness. It shows a jaguar sleeping on a tree. The image is cut out on white so that there is nothing seen but the animal. Therefore, the color range is limited by the tree bark and fur shades from yellow to dark brown which allows highlighting the jaguar. The choice of the animal gives the idea of exoticism while the fact that it is sleeping hints at rest.

The headline in capital letters located below the head of the animal is dark blue color to underline its message of relaxation. The copy contains a rather strong directive to “escape” to Sri Lanka as it is “a long way from everyday”. This phrase has a double meaning as the viewer is offered to go really far from routine and have some additional time during the flight to restore stamina. At the same time, this relaxing “overslept” substitutes a more common for airlines word “overseas” usually associated with long and tiring flight hours. By this long hours of flight are actually turned into its advantage. The details of the offer are given with exact pricing which supports a business-oriented approach. There is another text box below indicating the competitive advantage of British Airways – more destinations to Indian Ocean islands than other companies. Overall, the advert is targeted at middle-aged business people with rather high income as the proposal is quite expensive. It appeals to people who wish to escape from everyday routine and value their time and rest. Business orientation is emphasized by pithiness of the advert and restraint colors.

Comparing the two adverts it may be concluded that both target at a high-income group and offer exoticism. However, they have different approaches: while Emirates highlight comfort of their services on board, British Airways show a chance to relax for exact price. The services mentioned by Emirates suppose mainly female audience and males in search of exclusive care. At the same time British Airways rely mostly on striking exoticism. However, both adverts exploit bright though different images to catalyze consumers’ imagination of what to expect from these luxury proposals. 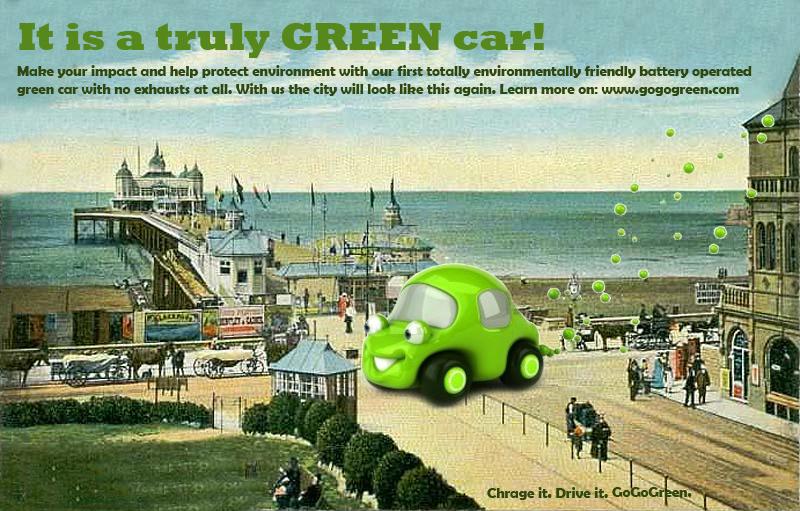 The GoGoGreen advert is appealing to people’s nostalgia as the good old times could boast better ecology and less haste. The main image is an original image of what Weston-super-Mare used to look like showing the Pier more than a hundred years ago.  But in the center of the image, on the cross-road, there is a bright green cartoon car with green bubbles coming out of the exhaust pipe. The image is really forthright to convey the “green” idea and it’s friendliness towards environment. The headlines states the car is truly “green” and the copy also repeats the word “green” to make sure the consumers understand and memorize the concept. Overall, the images convey family type atmosphere with people wandering along the streets and enjoying weather in the park. The car also smiles to attract children and their parents. This is important as parents are encouraged to care about their kids’ future lives and start improving their future world today. At the same time, protecting environment in a resort city will help to attract more visitors and increase local sales. The car standing among horses reminds about its’ limited speed crossing the rush out of people’s routine. In general the advert is very literal in the signs and meanings it uses and relies on emotions.